It’s another busy week of earnings and stocks look set to get off to a good start.

The Reddit-fueled GameStop GME, +19.20% frenzy appears to have cooled, after shares in the heavily shorted videogames retailer fell 78% last week having skyrocketed 1,737% over the previous three weeks.

In our call of the day, Deutsche Bank DB, -0.86% strategists said the most shorted stocks have actually been outperforming since March last year, long before users on Reddit’s WallStreetBets forum took aim.

They said that while shorted stocks typically fare better during broad market rallies, the size of the current rally was “off-the-chart.”

Since the March market bottom, the most shorted stocks — defined as the top 10% of short interest as a percentage of market cap — have rallied by 245%, outperforming the Russell 3000 Index RUA, +0.54% by 147 percentage points. 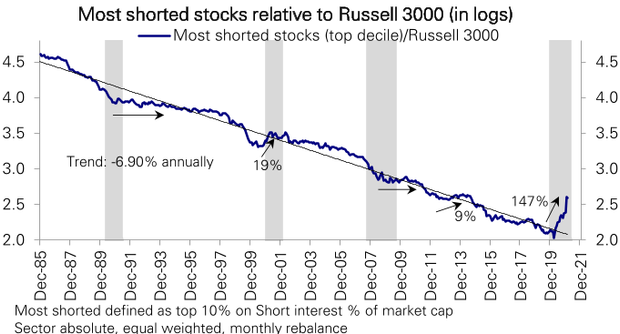 Led by chief strategist Binky Chadha, they noted that half of that outperformance came before the November U.S. elections and positive vaccine developments.

“We see it reflecting the fact that short exposure has remained heavily concentrated in stocks with low profitability and growth, especially in pandemic-affected industries, even as the unfolding economic recovery has improved the prospects for these companies,” they said.

Despite the recovery beginning to unfold, shorts are still focused largely on pandemic-affected industries, they noted, adding that there was skepticism of a strong recovery. “Nine months after the shortest recession ended in our view, the consensus has persistently lagged the actual improvement in macro data.”

They also said that despite a third consecutive quarter of “enormous” record earnings beats for S&P 500 companies, the 2021 consensus has only crept slightly higher and sits well below its own forecasts.

U.S. stock futures YM00, +0.40% ES00, +0.33% NQ00, +0.34% pointed higher ahead of the open at the start of another busy week of earnings. European stocks also made gains in early trading, despite concerns over the spread of new variants of the coronavirus that causes COVID-19. Asian markets were largely higher overnight due to growing optimism over the global economic recovery.

Hyundai Motor Co. 005380, -6.21% said on Sunday that it is not in discussions with technology giant Apple AAPL, -0.31% to develop an autonomous electric car, contrary to multiple reports.

Social media platform Twitter TWTR, +0.48% is set to record its second $1 billion quarter when it reports earnings on Tuesday, according to analysts polled by FactSet.

The Biden administration is set to announce this week that it will reengage with the United Nations Human Rights Council that former President Donald Trump withdrew from almost three years ago, U.S. officials said on Sunday.

Why some scientists think all life started on Mars.

Want more for the day ahead? Sign up for The Barron’s Daily, a morning briefing for investors, including exclusive commentary from Barron’s and MarketWatch.