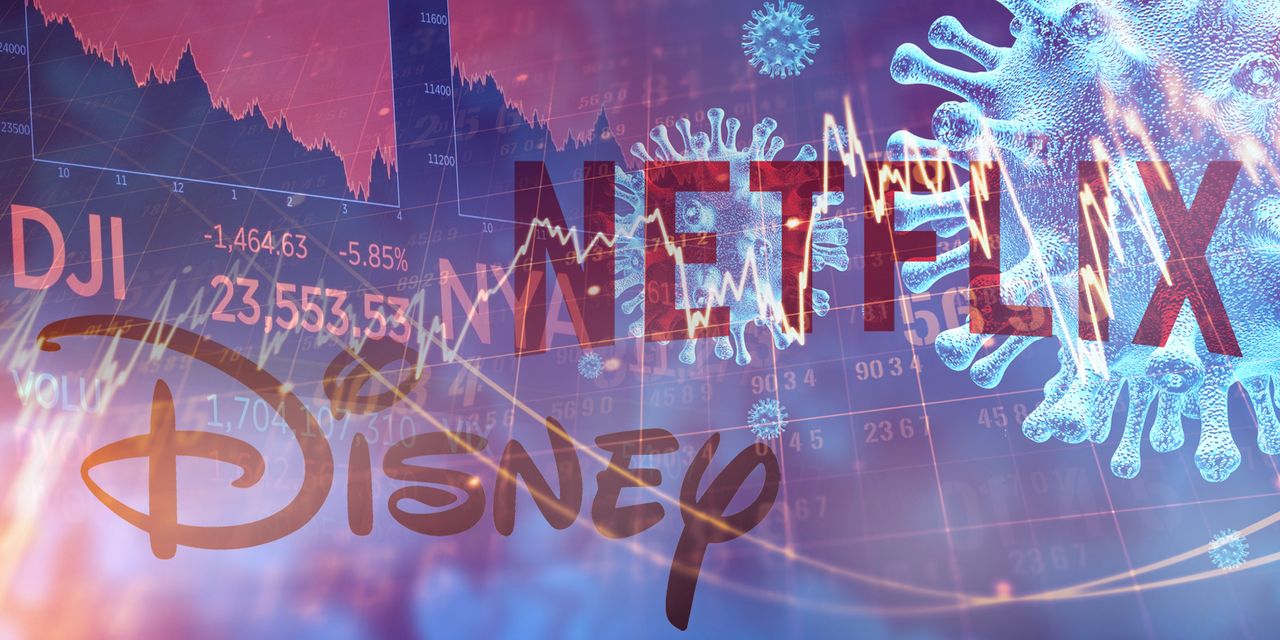 This article is part of a series tracking the effects of the COVID-19 pandemic on major businesses and sectors. For other articles and earlier versions, go here.

“He had the most monumental task that literally any incoming CEO has faced in decades. He walked into the eye of a storm,” Comscore senior media analyst Paul Dergarabedian said of Chapek, who replaced Robert Iger as CEO on Feb. 25, 2020, just before COVID-19 upended the world and the entertainment and tourism sectors that drive Disney’s revenues.

In the year since, however, Dergarabedian believes Chapek “has put the company in position to make it a stronger company,” a notion that a year ago seemed as fantastical as something out of the Disney DIS animated classic “Fantasia.”

The COVID-19 pandemic upended the home-entertainment ecosystem, turning it sharply toward streaming services like Netflix and Disney+. Video-streaming subscriptions world-wide topped 1 billion for the first time last year. Fueled by a pandemic that forced people to stay home and seek entertainment there, it rose 26% to 1.1 billion in 2020, year-over-year, according to data released by the Motion Picture Association.

“The timing for Disney+ (in November 2019) could not have been better.” Dergarabedian told MarketWatch. “The landscape of entertainment and the modes of consumption from consumers is forever changed, due to the pandemic.

“It will likely be remembered as a pivotal year for streaming,” when world-wide viewing time catapulted 44% in the last three months of 2020 vs. 2019, according to market researcher Conviva’s Q4 2020 State of Streaming report.

and Disney have successfully wooed customers to their streaming services, but the challenge will be to make increasingly more money from it. Both have hiked U.S. subscription prices in the past year, and Netflix is considering a crackdown on password sharing to haul in more subscribers. Netflix, which is eyeing licensing deals for its original content, is also snapping up content. On April 8, it bought rights to stream new Sony movies, including the “Spider-Man” and “Jumanji” franchises, starting in 2022.

They are not alone. The explosion in streaming services means Netflix and Disney will have more competitors attempting to filch customers as they, too, attempt to increase streaming returns.

Prime and Disney’s Hulu – and low-cost alternatives such as Comcast Corp.’s
CMCSA,

HBO Max somewhere in the middle. HBO Max is upping the ante this year on two fronts: It is simultaneously releasing all its major movies as they debut on the streaming service, and an ad-supported, low-cost version of the service is coming in June.

Ad-supported services like Peacock are “chiseling away market share” because they’re free and feature popular shows like ‘The Office’ with the possibility of Summer Olympics coverage, Demas said. Indeed, 63% of would-be Paramount+ subscribers said they will cancel another service to subscribe, and Netflix is the most likely victim, according to a survey by market research firm CordCutting.com.

On the flip side, the loser is pay TV. Over 100 million U.S. households had subscriptions to pay-TV bundle programming as recently as 2014, but that figure was down to 75 million in 2020, and media executives expect that number to plunge to 50 million in the next five years.

“Cord-cutting is accelerating.” says Purdy, who estimates consumers, on average, use three to five streaming services today vs. one or two years ago. “It’s almost like the smartphone market, when people owned multiple phones. And we are still in the early years of streaming.”

The rip-roaring success of streaming service Disney+, which has topped 100 million paid subscribers since its November 2019 debut, changed everything. It anchored a direct-to-consumer pivot at the Magic Kingdom that will reshape other operations.

In just 16 months, Disney+ is “halfway to Netflix, and they still haven’t rolled out their geographies,” Conviva CEO Bill Demas told MarketWatch.

The rollouts of Disney’s streaming service Star in Europe and Star+ to Latin America, he said, will turbocharge subscription growth. Since its launch in Europe in February, Disney+ has become the most-popular streaming service in the UK, Spain, and Germany based on time spent, according to Magalie Grossheim, senior analyst at market researcher M Science.

For now, Disney is stockpiling content on its streaming platform: It has set a target of more than 100 new titles a year that includes Disney Animation, Disney Live Action, Marvel, Star Wars and National Geographic.

“Our direct-to-consumer business is the company’s top priority, and our robust pipeline of content will continue to fuel its growth,” Chapek said. (The next day, Disney announced the return of the NHL to ESPN after a 16-year absence, beginning later this year. And on March 17, it announced plans to reopen Disneyland Park and Disney California Adventure Park, both in Anaheim, Calif., on April 30 to about 15% capacity. As part of the move, more than 10,000 employees are returning to work.)

On March 18, Disney upped the ante once again, announcing linear and streaming rights to NFL games through 2033 that will bring the Super Bowl to ABC twice, starting in 2026. ESPN+ will stream at least one NFL game in London. (Under the 11-year, $100 billion TV rights package, Amazon will gain Thursday night games, and Peacock will have one exclusive game per season for six years beginning in 2023.)

“This has been the most challenging year we have had in recent history, if ever,” Disney Chairman Iger, who is leaving the company at the end of the year, said at the shareholder meeting on March 9. “None of us imagined how virus would change life. Once again, we exhibited our resiliency.”

Disney has more than held its own in the fiercely-contested streaming market, and it sees a path to extend the concept of immersive entertainment so endemic to Disney+ to its other properties, such as the Star Wars: Rise of the Resistance attraction at Disneyland.

“There’s a million lines of code in the program that runs Rise of the Resistance,” which makes it extremely complicated but also makes it extremely immersive storytelling,” Chapek said at the Morgan Stanley media conference on March 1. “We imagine that that’s the world going forward.”

To be sure, applying the principles of a streaming service to amusement rides, cruises, movies, and live-sporting events is no cinch. Disney’s wildly diverse portfolio of content and services is an incredible array of moving parts, each with a distinct identity. But they all are interconnected by the brand, like Marvel superheroes, analyst Dergarabedian points out.

“You have to have a vision, and stick with it every day,” he says. “But we are really in the early days of streaming services. The biggest challenge is to stave off consumer confusion. And Disney has an identity, a brand, to do it.”

The narrative is different at Netflix, Disney’s chief rival in streaming, which offers a compelling bookend. It has shown an affinity to not only mass-produce content – it plans 70 movies in 2021 – but grab the most Academy Award nominations (35) for productions that include “Ma Rainey’s Black Bottom” and “Mank.” (Disney had the second-most Oscar nods, with 15, followed by Amazon, with 12.)

Substance and abundance propelled the streaming king to more than 200 million streaming subscribers for the first time at the end of 2020, even as the company raised prices in the U.S. and Canada.

On Jan. 19, Netflix reported 8.5 million net new subscribers in its fourth quarter, a dramatic uptick from the 2.2 million reported in the previous quarter and well ahead of Netflix and analyst estimates. For the year, it recorded an annual net gain of 36.6 million subscribers to 203.7 million.

Driving growth is the enduring popularity of Netflix programming. It was by far the most in-demand for original series (53.5%) in 2020 world-wide, according to market researcher Parrot Analytics. But it suffered a 6.3% decline in demand from 2019 primarily because of newcomers Apple+ (3.9%) and Disney+ (3.6%).

While Netflix was the market leader in the last three months of 2020, according to another researcher, Reelgood.com, with 22%, it lost ground to Disney+ and HBO Max.

This has fed, in part, to a sense among some analysts that Disney will become the market leader within a few years.

Benchmark analyst Matthew Harrigan, for one, is anticipating a changing of the guard. In a March 15 note that cut his stock price target to $472 from $485, Harrigan cited the potential negative impact of Netflix cracking down on shared accounts and the meteoric rise of Disney+. Harrigan, who kept his rating at sell, said the appeal of Netflix shares has been “dampened” by the trajectory of Disney+ as it nears Netflix in subscribers (currently at just over 200 million), and as the “stay-at-home” wave fades for the stock. Netflix needs “compelling” content every month to stave off churn, he added.

“We believe that any broad crackdown on password sharing could revive past pricing sensitivity concerns for likely marginal users, even though recent Netflix price increases have been readily absorbed by its base,” Harrigan wrote.

Netflix is experimenting with a prompt screen that asks those logging in if the account is theirs. The screen warns that accounts are designed to be shared among people in the same household, and provides click-through buttons to sign up for a separate account. If enforced on a wide basis, Netflix could conceivably juice its revenue, since up to one-third of Netflix accounts are shared.

This is one logical way to improve revenue. Another, albeit more radical scheme, would be to license original Netflix content to others, which the company is considering, according to reports.

From a two-horse race to a crowded field

The focus remains on subscriptions at Netflix and Disney, but each is exploring alternative revenue streams, says Scott Purdy, who runs KPMG’s media practice. Disney is already on the case, considering cross-pollination of its streaming technologies across its prodigious assets.

Netflix, however, is thinking of something far more radical.

The company is in talks with ViacomCBS and NBCUniversal about licensing Netflix original shows and movies to those platforms — including their linear networks — according to a report in The Information. Content would be licensed on a “limited basis” and series would be released on a weekly schedule, the report said.

Disney, Netflix, and the rest are also bracing for a likely higher-than-average churn rate in the summer when vaccines kick in and people venture outside and kids return to school.

“We are coming out of a situation that was conducive to streaming,” Purdy said. “That said, the industry is in its early stages. Even a more established streamer like Netflix still has lots of headroom. There are hundreds of millions of new subscribers to be had.

“And remember, there are plenty of big tech companies that have over 1 billion users.”