Home
Stocks
‘Heat map’ in U.S. stocks shows lower risk and higher reward for the rest of the year
Prev Article Next Article
This post was originally published on this site

What if there were a way to effectively, and easily, evaluate risk-and-reward for the next month or year? A new risk-reward heat map, also known as RRHM, is designed to do just that.

The RRHM is essentially a sophisticated “pros and cons” list that visually expresses whether risk or reward will dominate over a specific time frame.

In order for the RRHM to be predictive, I turn past events in into quantifiable, forward-looking indicators. Using the coronavirus as an example, here is how it’s done:

In the RRHM, this study is included as a bullish factor for March, April and July 2020.

When oil suffered a similar fate in the past, the S&P 500 traded higher six and 12 months later 90% of the time. In the RRHM, this study is included as a bullish factor for August 2020 and February 2021. (A detailed description of the methodology used and the type of events — i.e., technical breakouts, economic indicators, unique events, etc. — that are captured is available here.)

Year-to-date, 56 events have been turned into studies that were categorized as either bullish or bearish for a certain time frame.

The RRHM is still young and hasn’t established a long track record yet, but here is what’s available for review:

I published the RRHM, below, in the Jan. 15 Profit Radar Report along with the following assessment: “Based on the risk-reward heat map, we are approaching a period of increased risk with an initial emphasis on late January.” 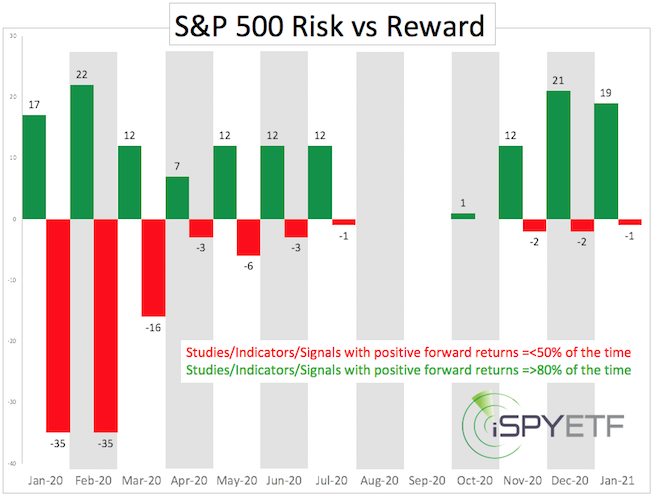 ‘Flash in the pan’ risk

Just as the RRHM shows increased risk for January-February, it also shows decreasing risk and increasing reward for the remainder of the year, with a clearly bullish tilt for the fourth quarter.

Since the RRHM projected increased risk for January and February, and we got a “big” (at least compared with recent price action) pullback already, the question is:

Will there be another risk event in February or has risk already been flushed out and it’s clear sailing from here on?

There are two key components to market forecasting: Time and price. The RRHM addresses time, and based on time, February still looks choppy.

Chart analysis and technical analysis can be used to identify resistance levels in terms of price.

A more detailed S&P 500 forecast based on investor sentiment and technical analysis is available here.