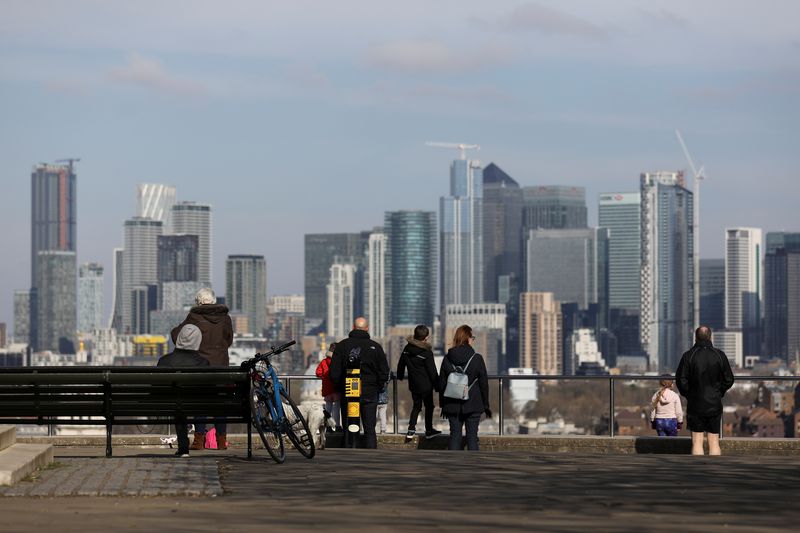 LONDON (Reuters) – Banks are dusting off their no-deal Brexit plans as concerns deepen that Britain and the European Union won’t agree a trade deal by December as the COVID-19 pandemic compounds fundamental disagreements over future relations.

Financial services exports to the EU are worth about 26 billion pounds ($32.51 billion) a year, and although Britain left the bloc in January it still has unfettered access until the end of December under a transition agreement, allowing banks, asset managers and insurers to continue serving their biggest export market.

But that leaves the UK with just a few months to negotiate a trade deal with the EU that would come into effect in January to avoid a “cliff-edge” in business activity. If it wants an extension to the transition period, it must ask Brussels by the end of June.

“Brexit is firmly back up the agenda, people are talking about it and are very conscious of the very short time to get any deal agreed,” said Catherine McGuinness, political leader of the City of London financial district, adding that financial industry groups met in recent days to discuss preparations.

“I don’t think anybody is expecting a transition extension at the moment, but the timetable is very tight. We are dusting down our papers on the various solutions to the cliff-edge problems.”

Despite fundamental disagreements in the talks and political focus shifting to the pandemic, British Prime Minister Boris Johnson has insisted he won’t request an extension.

“Brexit has not gone away. It’s full steam ahead. The trade negotiations are not going smoothly and we have to assume some chance of an exit without a deal,” a source at a major global bank said.

The government’s firm no-extension stance has killed off lobbying efforts by the financial industry, the source added.

Miles Celic, chief executive of TheCityUK, which promotes Britain as a financial centre, said the government had to be taken at “face value”, and bankers said the sector would not ask for an extension.

“People are looking at no deal preparedness again,” said Rachel Kent, a financial services partner at Hogan Lovells law firm who was present at the industry talks on Brexit.

Banks are largely reviving plans they had when a no-deal Brexit loomed several times in 2019 before Britain and the EU signed off on a divorce settlement and transition period.

Under the plans banks would move more staff and activities to their new EU hubs to serve customers inside the bloc rather than from Britain.

A source at a second major global bank said that although the coronavirus pandemic had eclipsed Brexit for now, its no-deal plans were still at hand.

“All the plans are there, it’s not like they didn’t exist,” the source said.

The source at the first major global bank said everybody was aware that financial market access under the EU’s patchy “equivalence” system was the best the sector could expect.

Brussels grants direct financial market access if it deems a foreign country’s regulations are in line with its own. The EU has said it would look to complete its assessment of UK equivalence also by the end of June.

“June is a key time politically and the key priority is those equivalence assessments being in place sufficiently in advance of the end of the transition period,” a European banking industry official said.

Obtaining equivalence is critical for clearing houses in London to avoid them having to tell EU clients in September to move positions worth billions of euros out of Britain by the end of the year.

“Although we would love to see progress by June, I am not holding my breath because, let’s deal with COVID first,” the City of London’s McGuinness said.

There is already talk that Britain may prefer not to have a trade deal to avoid having its hands tied while supporting an economy thrown into deep recession by the pandemic, Hogan Lovells’ Kent said.

“There is a feeling that can best be done without the constraint of being in the EU with issues like state aid and the need to have consent before supportive measures can be taken.”

Britain also has to decide whether to grant equivalence type access to EU financial firms that want to serve UK customers.

Bankers and McGuinness said Britain should go ahead and grant such access regardless of what the bloc decides on financial market access for Britain in coming months.

“We should be an open trading nation, we always have been and ought to remain so. It would be cutting our own nose to spite our faces if we keep people out,” McGuinness said.