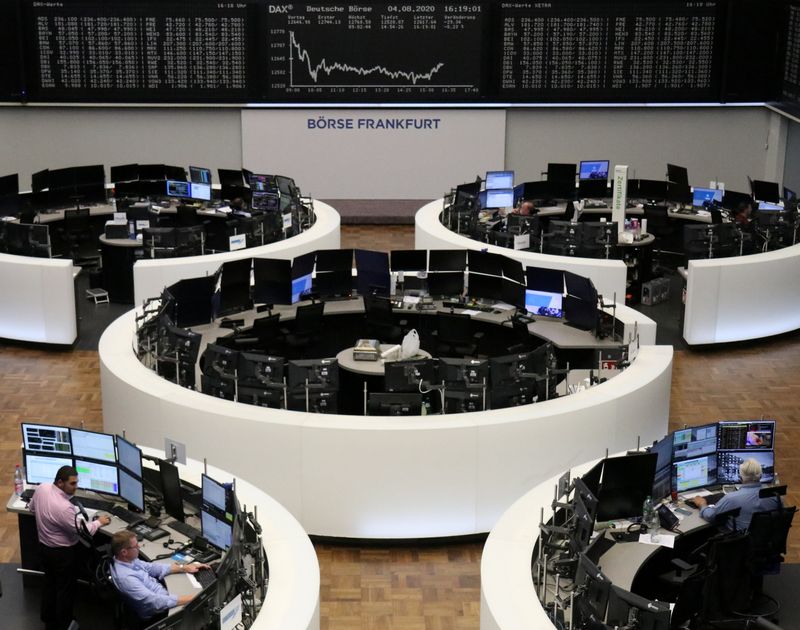 (Reuters) – European shares rose on Wednesday as positive earnings and the huge quantities of stimulus coursing through the financial system again overshadowed concerns about the surge in coronavirus cases in Europe and the United States.

Ahold Delhaize NV (AS:AD), a major operator of supermarket chains in the United States and Europe, hit a record high as it raised its 2020 sales outlook after coronavirus lockdowns drove more traffic through its stores and online delivery services.

German residential real estate company Vonovia (DE:VNAn) rose 3.2% as it announced an 8% rise in first-half core profits and confirmed its guidance for the year, boosting the sector (SX86P).

Bank of Ireland (I:BIRG) surged 10.5% after it said it was beginning to see some signs of recovery, while analysts pointed to an income outlook for 2020 that was better than indicated.

“Earnings season is helping support risk appetite as has economic data,” said Edward Park, deputy chief investment officer at Brooks Macdonald Asset Management. “That seems enough at the moment to offset the uncertainty about the U.S. case growth and pickup in European cases.”

A survey of purchasing managers earlier this week showed European manufacturing activity returned to a modest expansionary territory in July, however the rebound in the bloc’s service industry was not as sharp as expected.

“Manufacturing PMIs earlier this week is certainly helping the cyclical story, but there is temporary nature to the current outperformance,” said Park.

Among the decliners, BMW (DE:BMWG) slid 2.5% as lockdowns pushed the carmaker to a second-quarter operating loss as deliveries of luxury cars fell by 25% during the period.

Companies listed on the STOXX 600 are expected to report a decline of 67.5% in second-quarter earnings, down from a drop of 58.3% forecast the week before, according to Refinitiv data.