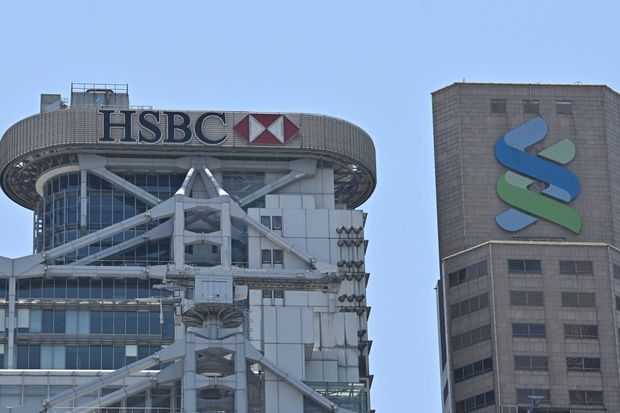 Signage for HSBC (L) and the Standard Chartered Bank (R) are displayed on the local headquarters of each bank in Hong Kong on April 28, 2020.

Shares of Europe’s top banks dropped on Monday, after the publication of reports alleging they kept doing business with customers they suspected of money laundering and other wrongdoing.

The report, led by Buzzfeed News and including other media outlets around the world, was on the basis of what are called suspicious activity reports filed by the banks to the U.S. Treasury, that had been gathered for Congressional investigators to look at President Donald Trump’s 2016 campaign. The banks by law are not allowed to comment on the SARs they file.

Deutsche Bank DBK, -5.03% shares dropped 4% as its money laundering vulnerabilities were known by its top executives, according to the Buzzfeed report. Deutsche Bank said it has learned from past weaknesses and said “we are a different bank now.”

Standard Chartered STAN, -3.39%, alleged to have done business with a company laundering money for the Taliban, fell 3%. The Asian-focused, London-based bank said “U.S. and U.K. authorities have publicly acknowledged that the Group has undergone a comprehensive and positive transformation over the last several years.” Barclays BARC, -6.37%, Commerzbank CBK, -4.15%, Danske Bank DANSKE, -3.17% and HSBC Holdings HSBA, -3.78% were also named in the report, as were several U.S.. banks.

On the move in Europe were shares of engine maker Rolls Royce RR, -10.18%, which on Friday said was considering raising up to £2.5 billion in new equity capital.

United Internet UTDI, -23.78% shares tumbled over 20% after Telefonica Deutschland O2D, -2.37% said in negotiations that it would hike wholesale costs. United Internet said it’s appealed to the European Commission over the matter.